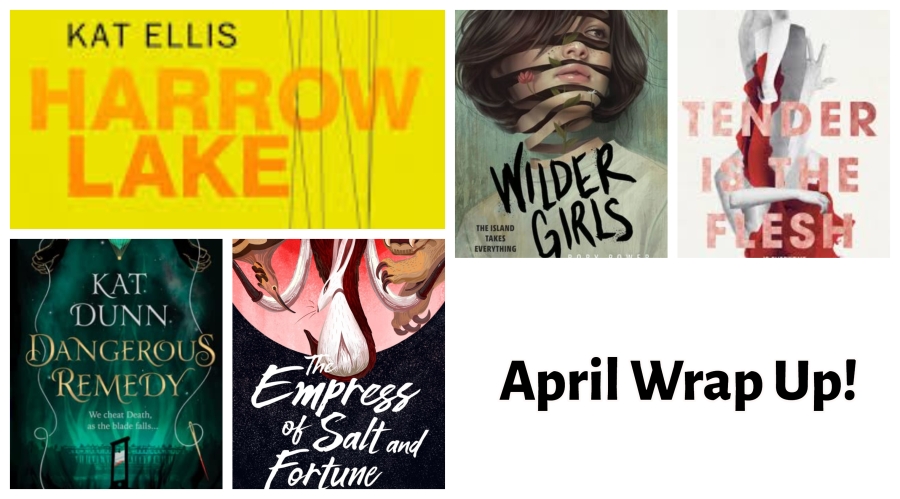 Snowspelled by Stephanie Burgis: ⭐⭐⭐⭐ (Review here)
Four months after Cassandra Harwood lost her magic, she finds herself drawn into a plot by a tricksy elf that has her life on the line if she can’t track down the magician that threatens to break the treaty – a mission that would be much easier if she wasn’t tripping over her ex-fiance everywhere she turns.

Thornbound by Stephanie Burgis: ⭐⭐⭐⭐ (Review here)
It’s finally time for Cassandra Harwood to open her magical school for girls, and she’s already fighting the government who want to keep her doors closed when a malicious fey altar is discovered in the library – can she find the culprit before her students, or her family, are hurt?

Spellswept by Stephanie Burgis: ⭐⭐⭐⭐ (Review here)
In a prequel to the Harwood Spellbook Series, we get to see how Amy and Jonathan, an unlikely and untraditional couple, ended up betrothed against the odds – and a precocious teenage Cassandra finally proving herself to the world.

The Secret Commonwealth: DNF @ page 242 (review here)
Lyra is 20 now, and it’s time for her and Pan to be drawn into a fight they didn’t know existed, and try and hold onto themselves – and each other – along the way.

Gideon the Ninth (x3): ⭐⭐⭐⭐⭐ (review here)
Lesbian necromancers with enemies-to-lovers energy have to learn to trust each other during powerful trials on an unfamiliar planet.

Harrow the Ninth (x2): ⭐⭐⭐⭐⭐
After [redacted] [redacted] at Canaan House, Harrow is dealing with her ascendance to Lyctorhood not going quite right, the loss of her cavalier [redacted] and the fact that god, and her fellow Lyctors, are all kind of… dicks?

Check, Please! Volume 2: ⭐⭐⭐⭐
Bitty and Jack learn to navigate their new and secret long-distance relationship while Bitty’s time at Samwell is racing towards an end.

The Monster of Elendhaven: ⭐⭐⭐⭐⭐
Elendhaven sits on the sea, haunted by a monster who cannot die and the frail master he dotes upon, and assists in his revenge plan against those who wronged their city, even if it costs them the world.

This is How You Lose the Time War (x2): ⭐⭐⭐⭐⭐ (review here)
Red and Blue write each other mocking hate letters from opposite sides of the time war, stashed across time and hidden from their bosses – until hate letters turn to love letters.

Wilder Girls: ⭐⭐⭐⭐
Eighteen months ago, the Tox crept out of the woods and the students at Raxter School for Girls were quarantined on their island home as their bodies rebelled against them – until Hetty’s best friend goes missing and she breaks the quarantine that keeps them safe to find her.

Tender is the Flesh: ⭐⭐⭐⭐.5
Marcos works in a ‘special meat’ processing plant, where ‘heads’ are processed now that animal meat is off the menu, running through the motions until a young woman head is gifted to him.

Blood Countess: ⭐⭐⭐⭐
Anna Darvulia has fallen into the sights of the beautiful and capricious Countess Elizabeth Bathory, as her confidante and her lover, but could liberating the Countess from her vicious husband lead to more blood and death than before?

Prosper’s Demon: ⭐⭐⭐.5
Prosper is one of the greatest minds the world has seen, if only he wasn’t demonically possessed, and our nameless, moral-less narrator is an exorcist with tough but effective methods.

Empress of Salt and Fortune: ⭐⭐⭐⭐⭐
A young royal is sent away from home for a political marriage, then sent as far away as possible with only her servants for company – her closest servant chronicles her rise to power, and tells a tale that all women should remember.

The Wolf and the Girl: ⭐⭐⭐.5
When a sorceress turns her friend into a wolf as part of a plan for revolution, Masha and Raisa must flee Russia to France and try and find a life of safety for themselves as a wolf-and-girl show, until a silent film of their act goes international and draws the fight to their doorstep.

All Systems Red: ⭐⭐⭐.5
Murderbot is a Sec-Unit tasked with protecting a team of human scientists, even though he’d rather stay far, far away from them, but when their mission goes awry it’s up to Murderbot to stop streaming entertainment and keep them safe.

A River in Darkness: ⭐⭐⭐⭐⭐
A haunting memoir of one man’s ‘repatriation’ to North Korea, a country he never knew, and his subsequent life, suffering and escape.

The Book of Three: ⭐⭐⭐
When HenWen, oracular pig, goes missing it’s up to Taran, assistant pig keeper, to track her down with his newly found and rag tag band; Princess Eilonwy, a king who would be a bard, and GURGI <3.

Harrow Lake: ⭐⭐⭐⭐⭐
When Lola’s famous horror film maker father is attacked, she’s sent away to the town that made him famous and the grandmother she’s never met, but there’s more than secrets waiting for her in the darkness of Harrow Lake.

Dangerous Remedy: ⭐⭐⭐.5
Camille, daughter of revolutionaries, leads the Battalion of the Dead and rescue innocents from Madame La Guillotine with her runaway girlfriend, an aristocrat and a deserter – until they bite off more than they can chew when they find a girl with mystical, dangerous powers.

Incendiary: DNF @ 16%
Renata was raised in the palace, using her power to steal memories for ill, until she escaped and joined the rebel forces – but now she’s going back, faking loyalty to those she hates to try and save the man she loves from certain death.

3 thoughts on “April Wrap Up”