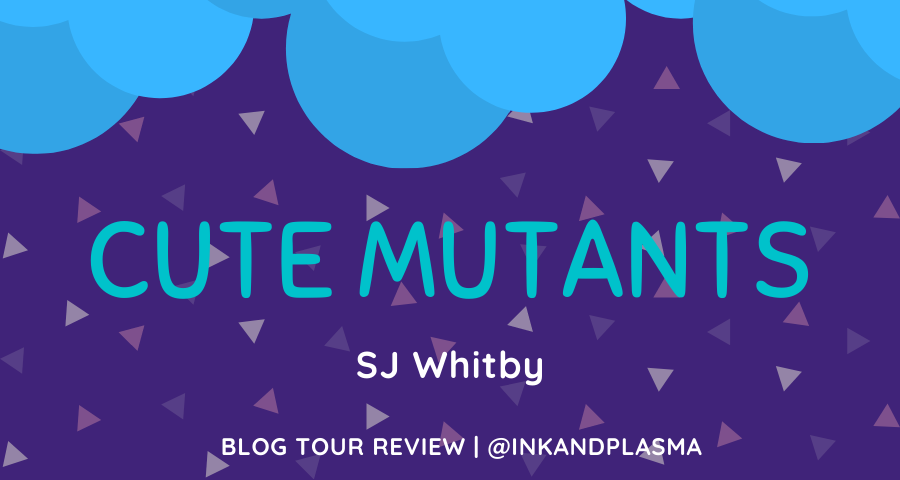 She tells me I’m amazing. Some days I believe it. I want to tell her she’s my best friend, but I’m scared I’ll ruin it.

There’s an outside chance that this might be my perfect book. Sapphics, mutants, a sentient bat and Pillow. If you like funny, nerdy prose and superqueero characters, this is your perfect book too. Not to mention look at that cover, all three volumes (two released and one upcoming) have covers as beautiful as the content.

Thanks to SJ Whitby and Caffeine Book Tours for the eARC of this book. It has not affected my honest review. Click here to see the rest of the tour schedule and find other stops!

I always wanted to be an X-Man. Except people and me never got along, and apparently you need social skills to run a successful team. Cue Emma Hall’s party. One hot make out session with the host herself, and I can talk to objects like my pillow (who’s far too invested in my love life) and my baseball bat (who was a pacifist before I got hold of him). Now there’s a whole group of us with strange abilities, including super hot ice queen Dani Kim who doesn’t approve of how reckless I can be. The bigger problem is a mysterious mutant causing unnatural disasters, and we’re the ones who have to stop him. Except trying to make a difference makes things blow up in my face and the team’s on the verge of falling apart. Can I bring them back together in time to stop the villain from taking revenge? Have I mentioned I’m not a people person? Magneto help us.

This book was an absolute revelation to me, honestly. I’ll admit to knowing almost nothing about it when I applied for the tour – queer superheroes was enough for me to know – and I went into it not knowing what to expect. My new favourite series is what I should have expected. I finished this book at 2AM after realising far too late that I couldn’t possibly put it down and instantly ordered Volume 2 as a treat to myself. Volume 2 is now staring at me, waiting me to finish writing this review so I can read it all in one greedy go.

The humour in Cute Mutants is spot on and the tone makes it an easy reading delight, at times I was trying not to wake up Tal with my cackling laughter in the middle of the night. I’m so attached to Dylan and the rest of the Cute Mutants and part of that is because they felt so real to me. Not to mention, several scenes from this book are currently living absolutely rent free in my mind. If you’re sick of hearing me shout about this book, take the hint and read it – you will definitely be shouting about it too. The writing feels very comic booky without being gimmicky, so it really did feel like a superhero story to me. If you’re a little nerdy (or, like me, a lot nerdy) you’ll love this book for its casual references to pop culture that enhance the story without taking you out of Dylan’s narrative. There’s a Buffy reference at one point that was as hilarious as it was brutal – and that’s as much as I’m saying without giving away the context.

I loved the breadth of queer identity in this book. Trans, nonbinary, pansexual, queer, asexual, this book is packed full of characters across a range of LGBT+ identities, each with their own distinct characterisations. And while this did touch on a few important LBGT+ issues (misgendering, bi/panphobia) it’s not an ‘issues’ book. Cute Mutants is packed full of queer joy and magic, and I will no longer settle for cishet superheroes, I just will not take it! The characters themselves are beautifully developed and I could read endless pieces focusing on each of them because I love their individual characters as well as the way they fit into the team dynamic. On top of that, SJ Whitby does one of my favourite things in hero fiction by giving each power a huge benefit but a drawback too. No OP powers here, these heroes have specific abilities that are sometimes painful, irritating or embarrassing to use. I liked that they weren’t set up for immediate unrealistic success, either. They had to learn to be a team, explore the limits of their powers, and I think that made for a much more engaging read – not to mention leaving me half in love with the entire cast.

The plot itself is interesting, but I don’t want to talk about it too much because spoilers, well supported by the fascinating characters, and it felt like a whole complete arc. Even knowing there was more to come, and even being desperate to read more, you can definitely read Volume 1 without worrying about being left with cliffhangers and unfinished story lines. I have a new favourite author in SJ Whitby for sure, and knowing that there’s a third volume coming in December and two more next year has me giddy.

SJ Whitby lives in New Zealand with their partner, as well as various children and animals. They are predictably obsessed with X-Men and spend too much of their free time writing.