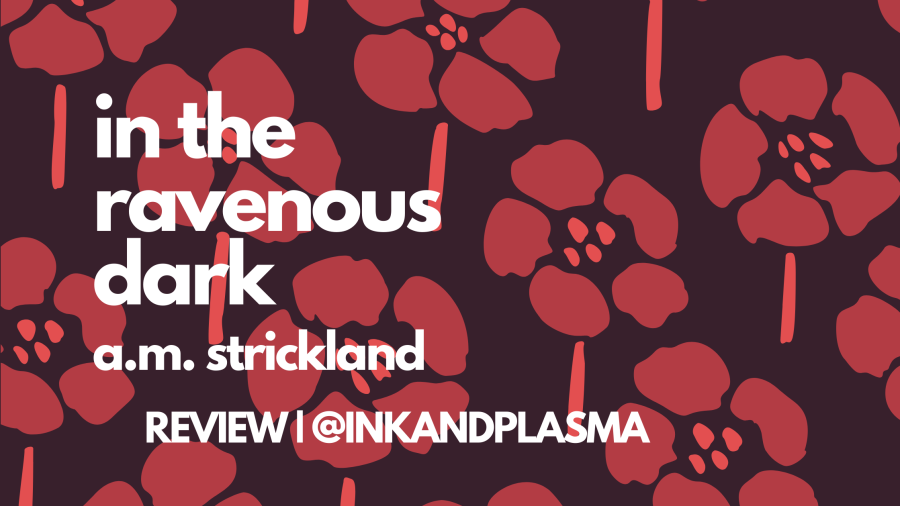 I totally requested this book based off of a tweet from the author where they mentioned ‘pansexual bloodmage’. That was enough for me initially, and after seeing the cover reveal, I was sold. This book absolutely didn’t disappoint me, and I’m so glad that I decided to pick it up! A.M. Strickland is going to be a new must-read author for me, I think.

In Thanopolis, those gifted with magic are assigned undead spirits to guard them—and control them. Ever since Rovan’s father died trying to keep her from this fate, she’s hidden her magic. But when she accidentally reveals her powers, she’s bound to a spirit and thrust into a world of palace intrigue and deception.

Desperate to escape, Rovan finds herself falling for two people she can’t fully trust: Lydea, a beguiling, rebellious princess; and Ivrilos, the handsome spirit with the ability to control Rovan, body and soul.

Together, they uncover a secret that will destroy Thanopolis. To save them all, Rovan will have to start a rebellion in both the mortal world and the underworld, and find a way to trust the princess and spirit battling for her heart—if she doesn’t betray them first.

I think I might have an ongoing emotional crisis over this book for a few weeks. I knew, I just knew from ‘polyamorous pansexual bloodmage’ that I was going to enjoy this book but I totally underestimated just how much. This was just so good. I absolutely loved the characters first and foremost, but A.M. Strickland also created a world that was so vivid and brutal that I was utterly immersed. This story is dark and awful in parts and I loved every single second of it. I listened to the entire audiobook in one day because I couldn’t stop, even finding myself extra chores to do so I could keep listening. I’m so glad that I ordered A.M Strickland’s BEYOND THE BLACK DOOR a few days ago because their writing is so beautiful and their characters so excellent that I already know I’ll love to read more from them.

The worldbuilding is interesting and unusual in lots of ways. Things were well explained for a YA standalone without dragging the story down or infodumping, and I never felt like I was out of my depth as information unfolded throughout the story. The magic system is super interesting. I’m a sucker for anything that includes blood magic and this was an unusual way to go about it. The blood magic allows mages to control anything living, or that has ever been living. It’s a hugely powerful ability and therefore is heavily monitored and managed. That made for a super interesting dynamic where the main character was, very early on, hugely powerful. Rather than our usual YA fare of ‘protagonist fights to get strong enough to overpower the Big Bad’, IN THE RAVENOUS DARK instead felt like a story where Rovan had to take on complicated political factors and moral debates before she could choose what side to take. The bloodmages are ‘managed’ through the use of guardians, spirits that are tethered to each mage to keep them from going rogue with their power, and that made for the kind of complex and messy relationship that I just love to see.

And relationships bring me onto one of my favourite things about this book. It’s so, so, so queer. SO queer. We have a central polyamorous relationship. The main character, Rovan, is pansexual, her love interest Lydea is a lesbian. Her best friend is a nonbinary asexual delight (they might be my favourite character) and the whole world is gloriously queer. The only time queer relationships are challenged are when they might impede heirs and succession, it never felt homophobic or transphobic. I am so in love with all the queernorm fantasy I’m reading lately. The characters were well fleshed out and very real, and I felt like the relationships developed very naturally. I liked that the polyamorous relationship developed openly, and with two very different types of attraction – one of trust and closeness and intimacy from the start, the other a complicated hate-to-love attraction. It made each feel like a strong relationship in their own right.

One thought on “REVIEW | In the Ravenous Dark | A.M. Strickland”

Leave a Reply to chelsea @ your bookish friend Cancel reply